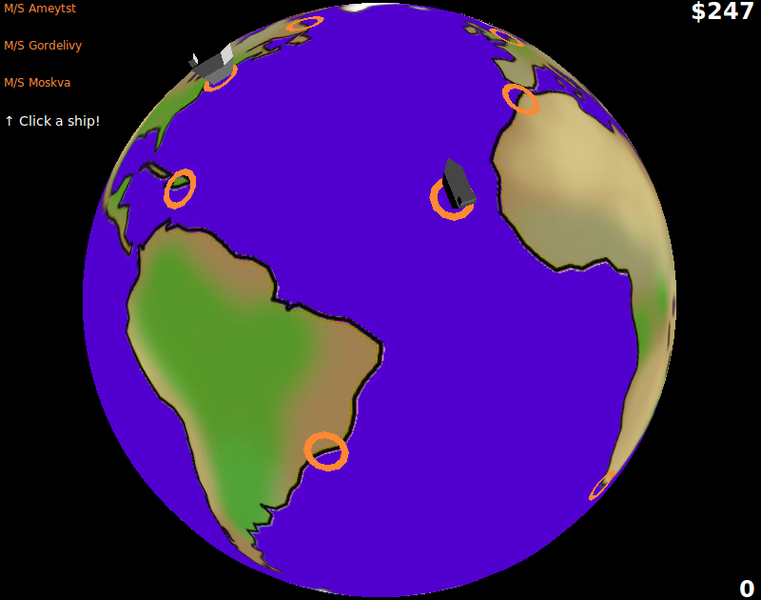 The result of the theme voting was announced at 3 a.m. Saturday morning (Swedish time). I spent the morning without working on the game, but thinking a little about the theme, which was tiny world. My first idea, and the one I went for, was a cross between two old games: Ports of Call and Elite. Ports of Call because it would be about shipping cargo across the world, and Elite because of the trading aspect, coupled with real-time driving of the vessels. In the end, it turned out less like a strategy game and more like a driving game compared to my original idea. All for the better, I think.

The competition entry can be played online.

I spent most of the time working on the game at different cafés in Stockholm. Two friends joined, so we could work on our respective games while chatting and drinking coffee.

I posted about the technology I was going to use on the Ludum Dare site, and those are the tools I actually ended up using, so I actually made an HTML/JavaScript/WebGL based game instead of chickening out and using proved technology.

Let me tell you a bit about the tools:

Considering my relatively relaxed attitude towards the competition, the game turned out pretty well. As always at the end of one of these competitions, I have lots of plans for how the game can be improved and that I should make a real polished game out of it.

I just know how that normally turns out. You know, there are so many other games to be made!

Previous: I'm in Ludum Dare 23
Next: No, that's not why OO sucks