It's about time I tell you about one project that I've been working on from time to time for the last months. It's called Screenplain, and its purpose in life is to take an input file in a simple text format and output a properly formatted screenplay. 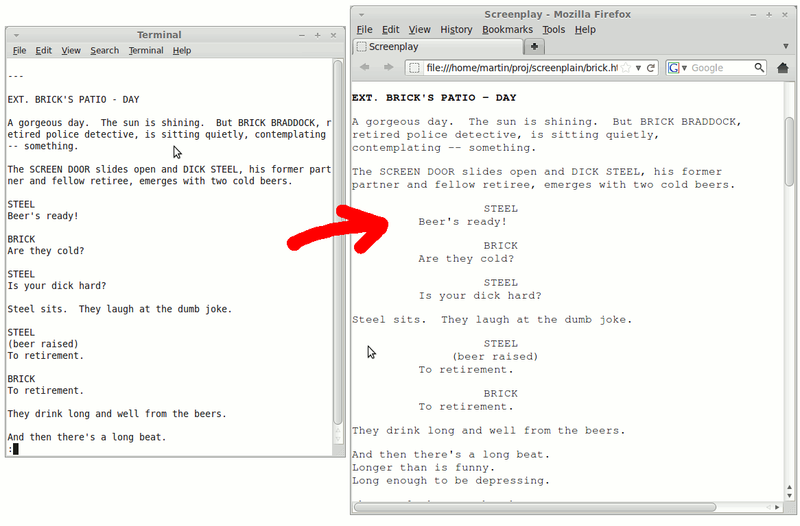 Screenplain can create files in HTML and FDX format (a file format used by Final Draft, which is commonly used in the film industry), but the most interesting story is perhaps the one about the input format.

The idea is that a plain text format is flexible. It can be edited on almost any computer or mobile device. If you're on the go and there's no screenwriting software for your smartphone, you can still edit plain text files with it. The problem with text files is that it can be difficult to comply with the standard screenplay format. With Screenplain you don't have to. Just write your script as plain text, and Screenplain takes care of formatting it so it looks good.

I started working on Screenplain this summer, and at the same time Stu Maschwitz pulled a lazyweb and basically wrote, "wouldn't it be great if there was some screenplay software that could work with plain text?" He had given much more thought to the idea and even wrote a formal specification of the text format. He called the format Screenplay Markdown (SPMD) as it is inspired by John Gruber's popular Markdown (which I'm incidentally using to write this very blog post). Great! I rewrote Screenplain to use his format instead of the one that I had come up with.

Then I created an online version of Screenplain so that people can try it out without having to install anything. That caught some interest.

Jonathan Poritsky did a great job on creating a style sheet so that Screenplain's HTML output looks as close as possible to an actual screenplay. (This is tricky to do in HTML.) He also made sure that Brett Terpstra's Markdown editor Marked got support for SPMD through Screenplain.

There is still lots to do with Screenplain. I'd like to add PDF output support and perhaps make it more friendly for people who aren't that familiar with the command line (though if you have a Mac, Marked should be easy to use). If it weren't for Stu's and Jonathan's enthusiastic support and work, I still wouldn't have considered Screenplain ready for release. But as people say: Release early, release often. And I did -- the former. And I understood that Screenplain is already pretty damn useful. Please let me know what you think.

Screenplain is licensed under MIT and the code is available at Github.

Today, Jonathan and Brett made a second release of SPMD for Marked (which uses Screenplain). See their posts:

Previous: Usability and terminology in Git
Next: So much better: Fincher's The Girl with the Dragon Tattoo