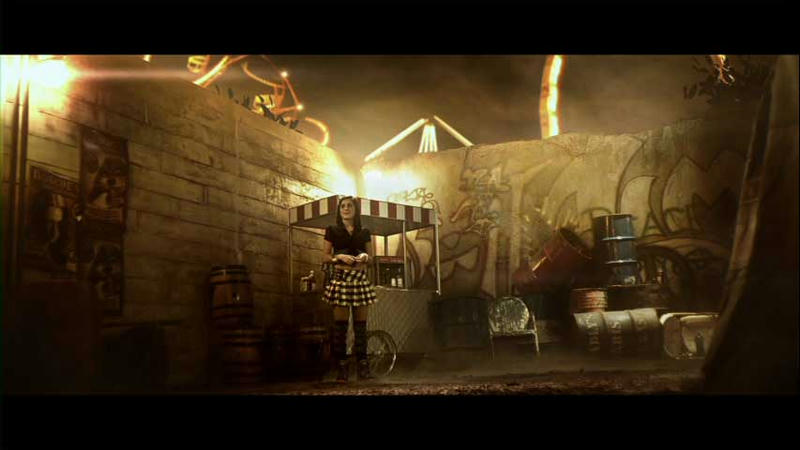 I received a copy of Alex Ferrari's new short film Red Princess Blues in the mail. Yes, snail mail still exists, and it is a good way to get someone's attention. As I prefer watching movies on the TV instead of the computer, I'm thankful for that. So what can I say about the film?

Well, there are two kinds of short films: the ones that use the short format to tell an interesting story, and the ones that are more like a showcase for a feature. OK, there are more kinds, like art films that don't bother to tell a story at all, but let's leave that aside. I have the impression that American shorts more often than not are the showcase kind, that are supposed to be a "demo" for the real deal, which is the feature. Producing a short is a way to show that you have the skills to produce a good feature. In Europe, shorts are more regarded as an art form in itself. In my opinion, many European shorts are too much art and too little movie, but the good ones deliver a cinematic experience that works with the short format instead of feeling just like a trimmed down feature.

I have written previously about Ferrari's shorts Broken and Cyn. I thought Broken was a great action/effects sequence, but it didn't deliver what felt like a complete story. It was more like a sequence taken from an action movie, hence a feature showcase. Cyn was more like a real (European style if you will) short film as it told a short but complete story.

So what about Red Princess Blues? It's a tale of Zoe, a young innocent girl who goes to some seedy carnival backstage bar. She meets the sleazy carnival worker Rimo. Being sleazy is like a rule at this place, so everyone is dripping of grease and sweat. Several scenes in Robert Rodriguez's movies come to mind, like in the bar in From Dusk Till Dawn. Anyway, a young innocent girl in a shabby bar; that can only end in trouble. And it does. Fortunately for Zoe, the mysterious Princess is there to help her out of the situation. The film's climax is a fight scene with (for a short) impressive stunts and choreography.

What makes this short stand out from so many others is the production design. The bar with the old and worn posters for carnival attractions looks great. There's also good acting from Richard Tyson (Rimo, the seedy carny) and some well-written dialogue.

So, in what category does this short belong? Does it feel like a demo for a feature? The answer to that is, yes, definitely. It is actually supposed to be the first scene in a feature film. Perhaps it's unfair to judge it as a short for this reason, but sorry, Alex, I'm European. I look at shorts as independent works of themselves.

Even though the movie's runtime is only 11 minutes, the story moves along a bit too slowly. After the first minute, you pretty much know what will happen. The title character, Princess, doesn't get much screen time until the last third of the movie, which is problematic since in any movie there isn't much drama until the protagonist and antagonist start their conflict. Spending seven minutes before introducing the protagonist would not be a good idea even in a long format film, so I hope Ferrari will reconsider this if he gets to make a feature.

Apart from there being not much of a story, I was impressed by this film. It was shot in two days at a budget of $10,000, which is low but not ultra-low, and the production values are great.

The film, together with behind the scenes material, is sold as an iPhone application, an interesting way to market and sell a short. It's only 99 cents, but with enough downloads it may be a way to finance a movie.

So, does Red Princess Blues work as a stand-alone short film? Not really. But as a "demo" to attract attention and financing for a feature? Absolutely.

Go have a look at the film's web site, and also take a look at the animated prequel Red Princess Blues Animated which is available on MySpace and IMDB.