"Make sure the subject fills 10%, 56% or 80% of the frame." Can this be a new guideline that photographers should know about? A research paper presented at last week's Eurographics seems to suggest so.

Optimizing Photo Composition by Dr. Ligang Liu et al describes an algorithm that measures how well a photograph is composed. For this they use photographic "rules" that professional photographers know and use because they are known to give aestethically pleasing results. One of them is the "rule of thirds", where you draw four imaginary lines to divide the image into a 3 by 3 grid and place the subject close to one of the intersections. Liu et als algorithm measures how well a photo adheres to this and other guidelines that are known to create a good balance in the image.

An interesting result of their research is that they seem to have discovered a rule of photographic composition that was previously unknown.

In their algorithm, they measure the number of pixels occupied by the photographic subject (the "salient region") relative to the size of the whole photo. This gives how large the subject is in the picture. When measuring this on several professional photographs, they found that this "fill ratio" was not evenly distributed or followed a simple bell curve. Instead, some ratios were obviously more common than others. See the histogram below, taken from their paper. 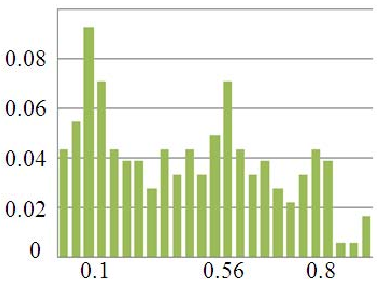 Can this be a photographic guideline that professional photographers so far have followed intuitively? Should it be included in photographic tutorials, along with the rule of thirds?

Previous: This kicks content-aware fill's ass!
Next: Use web technologies for GUI development!