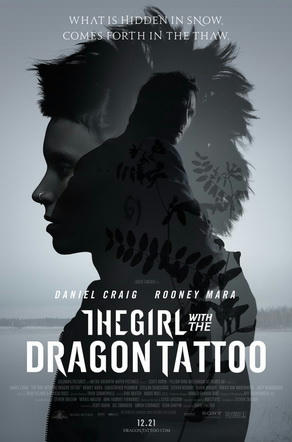 In a previous rant I posed the question, "What is wrong with The Girl with the Dragon Tattoo" (the Swedish version, directed by Niels Arden Oplev) and proceeded with trying to figure out why I didn't care very much for this successful film.

I was pretty sure that David Fincher's re-adaptation of the novel would be better.

And boy, was I right. I love it when that happens. (Although I'm getting used to it.)

The story is very much the same. The differences between the two versions is more about the details. The mise en scène, costumes, writing, cinematography and editing just feels much more solid. (Especially the writing and editing. In Fincher's version we don't get stupid lines like "Do you have a negative scanner?" followed by an pointless scene showing the main character scanning old photos.)

First of all, there's the title sequence:

Fincher's movie starts out with pretty much the same scenes as Oplev's version, but this dark, oily and disturbing James Bondesque sequence makes up for the lack of an opening scene that gives a hint about the events that will follow.

When the story starts to unfold, it is exciting even though having seen Oplev's version, I know what will happen. (I guess that was "everone else's" experience of the Swedish film, as "everyone else" had already read the book and loved the film. See my old post.)

I didn't count, but I think Fincher cut down on the number of characters, and certainly tells a tighter story. The story with Salander's supervisor was good in Oplev's film (the best part of the film actually), but felt disconnected from the rest of the story. Fincher manages to keep it all together. And he makes Bjurman the rapist a more interesting character.

Talking about characters, Fincher's Salander shows more of a character arc. She starts out harsh and unpleasant, but by the end she shows more emotions and we end up feeling sorry for her. In Oplev's version she she's sort of an asshole through the whole movie. That's cool too, but we humans love to see people change for the better.

All in all, Fincher's film is a better watch than Oplev's. With seven times the budget, anything else would have been embarassing.